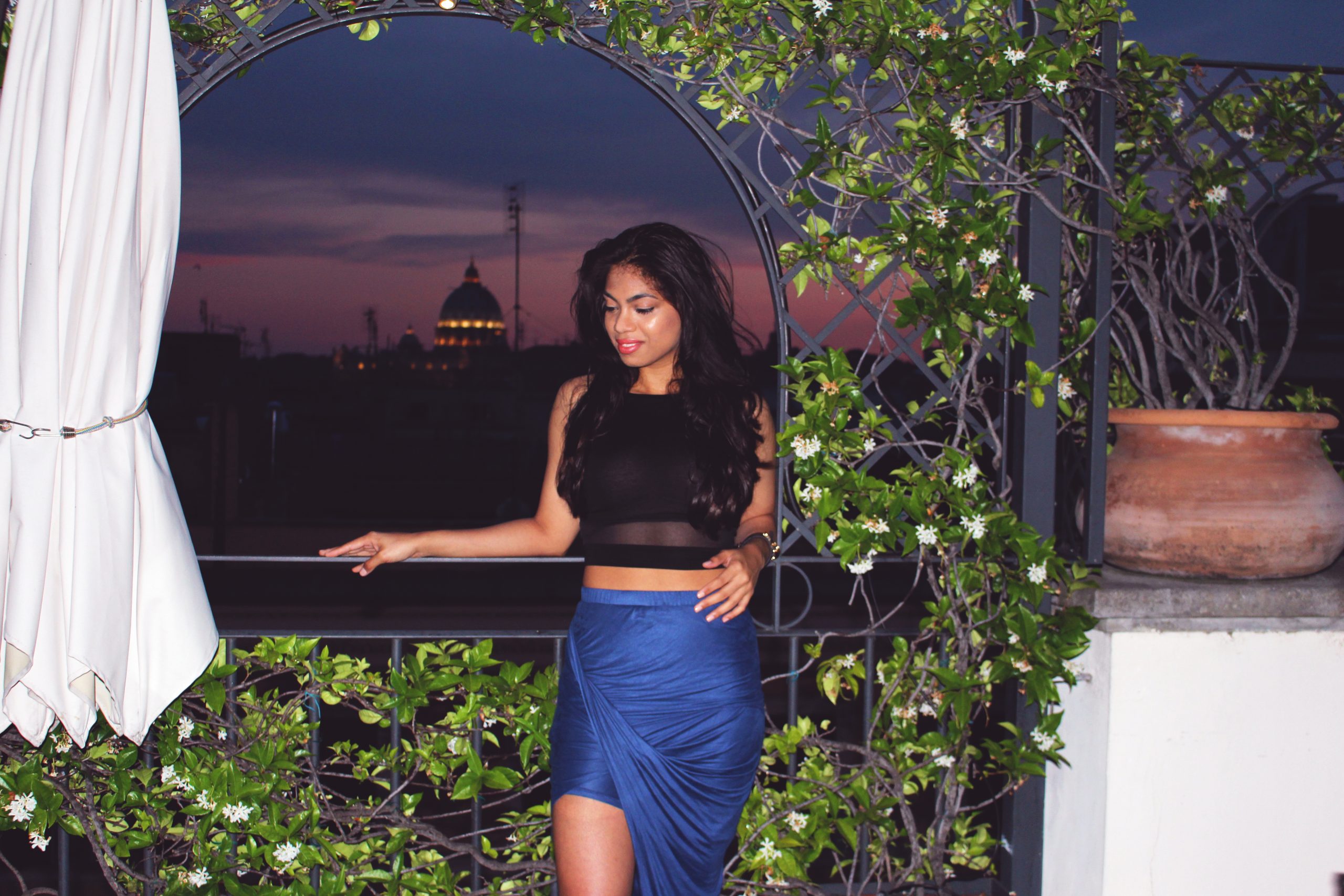 When you own 2 growing businesses, are working on starting up a third, studying for your part-time Master in Marketing at the university and try to keep up with blogging, you tend to lack time and opportunity to share some amazing experiences. One of which, I would still love to share with you, is my trip to Rome, Italy.

Rome stole my heart from the very first minute. Mostly because the beauty of ancient Rome is still so clearly visible despite the modern architecture. It’s authentic, mysterious and charming. When in Rome for 5 days, I would definitely recommend the top sights, because they really are a must-see if you care for history, culture, art and architecture.

With over 1500 pictures taken, I’ve decided to share only a handful, because I think you all should go see and experience the beauty of Rome in real life if you have the chance. A small note upfront: If you would like to see the pictures below in a larger size than portrayed, just click on them and they will open in a new window in full size.
The adventure started in Düsseldorf, Germany, from which we took a flight to Fiumicino Airport in Rome. Flying over the Alpes was breathtaking!

Hotel Isa welcomed us warmly, with a direct view of the Saint Peter’s Basilica from the rooftop. Stunning, during day, but even more around sunset. Hotel Isa was easily booked through Booking.com

The first day, we set out to explore the neighbourhood around the hotel, which included, on one side, several ice cream parlors (ice cream in Italy is heaven!!), supermarkets, restaurants, small clothing markets, with stylish and surprisingly high-quality clothing! On the other side lies Piazza Cavour with an impressive building block of  the Ministry of Justice of the Roman Republic.

We went out for lunch, and ended up doing a lot of shopping at the small markets. We also purchased Roma passes, with which you get free public transport during 3 days and free entrance to 2 museums. You also get discounts on entrance to other museums and most of the time you can skip long lines. Typical Rome street view:

Before dinner we explored Rome by night, and went out to see the famous Trevi Fountains, but to our disappointment, they were under construction, so not much to see. On the way to Trevi fountains there are many stores and tourist markets open (until late at night), making Rome busy and vibrant, even at night.

On day 2 we went to the Colosseum and the Roman Forum.

The Colosseum, known for being the largest theatre for gladiator and wild animal fights ever built, was quite impressive due to its collossal design and immense details. When you’re standing there, you immediately understand why it’s considered one of the seven new world wonders.

How amazing is this structure! It’s unimaginable that they built this entire theatre 70-80 AD, with such architectural detail and skills.

And of course, when  you get treated like a Roman Princess, it’s twice as fun!

Interesting Fact: It is thought that over 500,000 people have lost their lives and over a million wild animals were killed during battle at the Colosseum.

The Roman Forum, which is located across the Colosseum, is a plaza containing the ruins of several important ancient government buildings of the Roman Empire. It’s worth to see because these ruins are impressive, considering the date they were built in and the details, immensity, charm and mystery.

Interesting Fact: Concrete was a Roman invention used on many structures such as the Pantheon, Colosseum, & Roman Forum, which is also the reason that many of these structures still stand today.

Below the view of the Colosseum from the Roman Forum, I couldn’t resist a little jump of joy.

Day 3 we dedicated to a tour through Vatican City, which consists of the Saint Peter’s Basilica, the Sistine Chapel and the Vatican Museums. This is an absolute must-see, whether you’re christian or not, even if you’re not religious. The many tales that are told in the form of paintings, and sculptures, from bottom to ceiling, it’s mesmerizing. The fact that all of the art and architecture is hand-carved, sculpted, painted, with every inch being covered top to bottom, it’s just unreal. Next to that, you have the unbelievable amount of wealth that is captured within the walls of Vatican City, in the form of art, loads of gold, but also marble and granite floors, sculptures and sky-high pillars. Having seen this, it’s even more difficult to understand how it’s possible that a centre of religion can be so extremely wealthy, while there is so much poverty in the world. To me, it contradicts the whole foundation of religion in general.

I would recommend a special tour through the Vatican Museum, which is somewhat similar to certain parts of the Louvre Museum in Paris, France. The Sistine Chapel, however, is unique in its form, with specifically, Michel Angelo’s life work. The history and information you get from the tour operators is worth it, and enriches the entire experience.

And of course, I had to do 2 minute shoot in the middle of the pillars of the Vatican Museum!

After Vatican City, we went to see the Pantheon, which was a ”Temple of the gods” during the Roman Empire, now a Roman Catholic Church. The ceiling of the Pantheon is particularly special and worth seeing.

Interesting Fact: Modern Rome has 280 fountains and more than 900 Churches.

While there are many other ancient and beautiful Basilica’s and churches, I would have to be honest and say that if you’ve seen the Saint Peter’s Basilica, you don’t really need to see the rest, because it’s fairly similar, only St. Peter’s is definitely most impressive.

Very close to the Pantheon is the Piazza Navona, where we ended up after visiting Pantheon. It’s a lovely plaza with the Fontana dei Quattro Fiumi (Fountain of the four Rivers), surrounded by ancient buildings depicting typical Roman Empire Architecture.

Interesting fact: the Piazza Navona and Fontana dei Quattro Fiumi have been mentioned in Dan Brown’s Angels & Demons as one of the Alters of Science.

Day 4, after enjoying the Italian cuisine so much, I just had to get my workout in, and there was no better place to do it than the Spanish Stairs.

A few times running up and down, combined with some squats did cause certain turning heads, but hey! who cares, I got to workout on the famous Spanish Steps in Rome!! Obviously fully dressed in Wulterkens Sportswear.

After or before visiting the spanish steps, you can do some serious damage shopping in the street leading up to the Steps, which is where the Chanel, Valentino and many more brand stores are located.

I wouldn’t be Nadira, if I wouldn’t dedicate a part of this blog to the amazing Italian Food. From talking to several locals, we found out that the neighbourhood called Trasteverre, known for its many authentic restaurants, was the place to be. We ended up eating there 3 out of 4 nights, and only thinking about that food makes me long for it again. It’s safe to say that the best Italian food, I’ve ever had, was in Trasteverre, and to be more specific, the restaurant Le Mani in Pasta.
Le Mani in Pasta is small, dark, but authentic, and the food is heaven! They are always fully booked, so I would suggest making reservations immediately after booking your flight and hotel. It’s mostly booked by locals, which says a lot about the quality of the food. We also made friends with the staff and chef, and even got a tour through the kitchen. I can’t wait to go back again. Every dish we ordered was amazing, but my favorite was the Truffle Pasta.

Interesting fact: In Ancient Rome it was common for people to vomit between meals, so they could eat more. Anyone still hungry? Haha!

Another restaurant that I would recommend is Splendor, walking distance from Hotel Isa and great food, service and staff! Also, they have the most amazing authentic Italian Pastries.

Before dinner in Trasteverre, so authentic and beautiful.

A few tips:
– Bring your comfy walking shoes!
– When you head to the Vatican Museums there is a dress code, make sure you’re decently dressed and covered to show respect when entering the chapel and basilica.
– There are large organized groups of pocket pickers, as there are in any major city, so be alert and never keep all of your valuables in one place. Make sure your bag is in front of you and try to hold on to it when walking in a crowd. They usually request your attention with something, while another one grabs your wallet without you even noticing.
I only took with me a credit card and some cash, which I put into my bra, pretty old-school, but you can be sure they won’t be touching there without you noticing.
– Public transportation is perfect to view all the above mention sights. With the Roma pass it’s free for 3 days, so I would definitely recommend getting the Roma pass.
– To get to Trasteverre, you will need to take a taxi (depending on where you’re staying of course), if you have the name of the restaurant, they will likely drop you off right in front of the restaurant

On our last day, we went back to Trasteverre, Le Mani in Pasta for lunch, after which we got Ice cream and a taxi to the airport. Picture below taken on day 5 in another Trasteverre street.