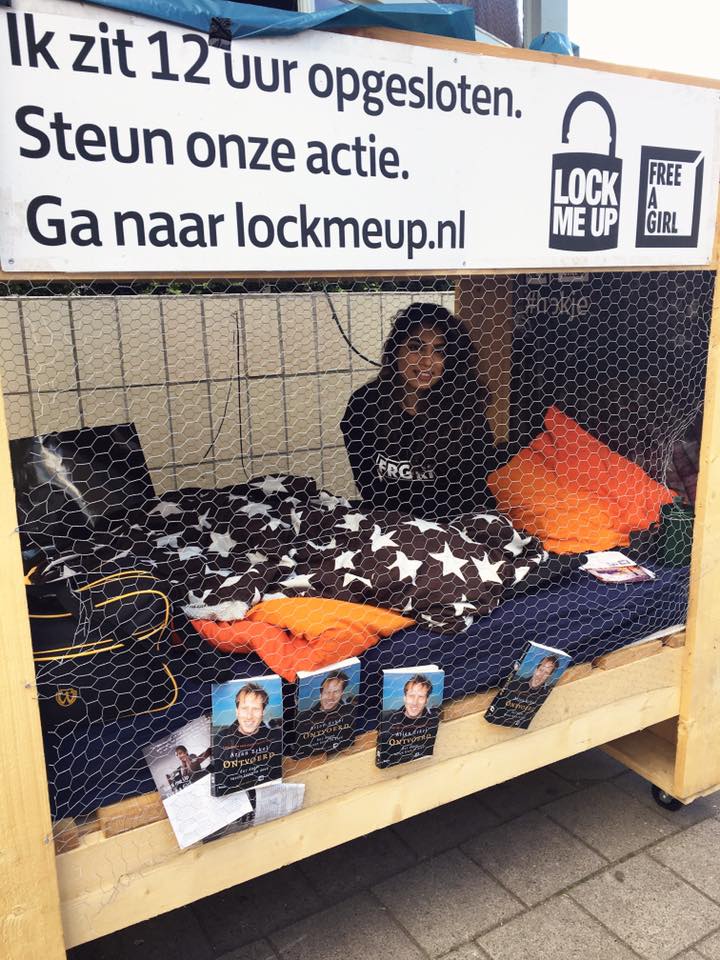 I’ve decided to write this while it’s still fresh in my head, as I’m sitting on the couch with a sniffy nose and some minor lower back pain…counting the MANY blessings in my life.

You really see things in a different perspective after having been locked up in a tiny cage of 2 square meters for 12 hours….
”Of course” I remember saying when asked if I was willing to do this for the Free A Girl Foundation, without actually thinking it through. I had no idea what I was getting myself into, as I expected it wouldn’t be all that difficult to raise money for a good cause with my following. Boy, was I wrong! After 1,5 week of trying to get people to donate, I was completely and utterly disappointed.

My mind couldn’t comprehend how shallow, ignorant and ego-centric people are, to give so much attention to all the things that aren’t important (stupid selfies, food pictures etc.), but choose to turn their heads when things that ACTUALLY matter pop up. I couldn’t understand how we always complain about the many things that are wrong in this world, but when given a chance to do something about it, we just stick our heads in the sand. We can start a debate on whether social media would be the right platform for promoting charity; but I figure, since Social Media is such an integrated part of our lives, it would be the most logic place to get people’s attention.

Anyway, I was disappointed…With my 27K+ followers on Instagram and 8000+ friends/followers on Facebook, if half would donate €1,- or $1,-, we should be able to save quite some lives. And this reach is direct, I’m not even including friends of friends etc. I’ve learned that with only €50,- we can save one young girl from a miserable life in prostitution. Many of us spend more than that on coffee in a month!!!!!

I also remember looking at a television charity program, collecting money to save threatened shark species. It was focused on children, and it was so beautiful seeing all these kids so driven to collect as much money as possible.They eventually raised about  €600+K, all with the purest intention of all these kids, and I remember hoping that they would keep this pure loving view when growing older.

So after all this, I started a truth bomb dropping rant on Facebook, because I was tired of playing nicely. It actually helped quite a bit, with so many people sharing it and FINALLY donations started pouring in, letting me keep my faith in humanity.

Free A Girl
I quickly learned that by now the Free A Girl Foundation has saved 3700 young girls from a life of forced prostitution, ranging from ages 5-15. Imagine this was your daughter!!! I figured it was worth fighting for. Apart from freeing them from an (to us) unimaginable life, they also provide trauma counseling, medical care, a good roof over their heads, education and legal support. The worldwide sex trafficking industry is an extremely large shady, crooked, complex industry, but the estimates are that at least 1,8 million children are currently victimised (and counting of course). Free A Girl also prosecutes the offenders, which really makes the change, one small step at a time.

So yesterday it was D-day…time for me to get into a situation as similar of all these young girls (as legally possible). The funny thing is, I saw a comment yesterday of someone saying ”how ridiculous it really is”, that people have to go through such lengths to raise awareness for things that are SO serious, that people should be giving it attention from the get go. Unfortunately, we live in a complex world. So, I didn’t mind going through some lengths. In my eyes it was a small sacrifice for the greater good.

You have the cage of 2 square meters and there is a thin mattress in it closed off with wire mesh on the sides, with a little opening for an arm to collect donations. The top was open. The cover sheet of the mattress was dirty. I had an electric cable cord with socket in it, to be able to keep my phone and laptop alive. Yes, this is where a lot of people think it was just a relaxing day with entertainment, which could have been, only I was constantly using both my phone and my computer to ask for donations. I had a pillow, a quilt and a fleece blanket with me, a 1,5 litre bottle of water and that was it. When I settled in, I thought…”Ok, this is not so bad, I can do this”.

We were allowed a bathroom break every 2 hours, but only went out 3 times, of which one was to eat a bowl of rice, which was the only food we got within the full 12 hours. 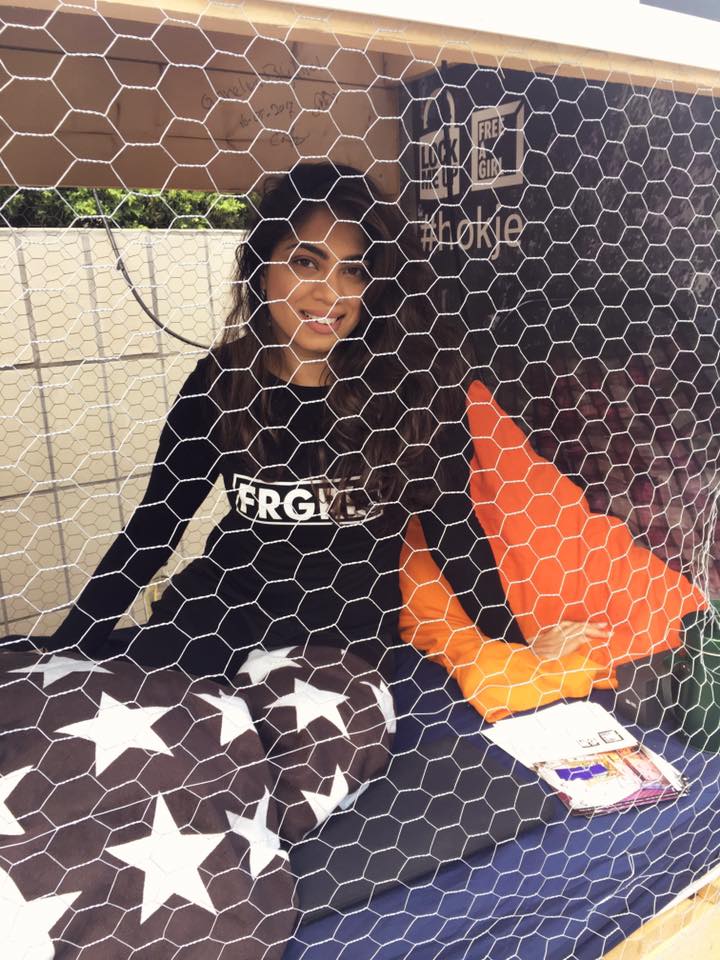 The cages were outside, right next to the street, so there were constantly cars driving by, people walking/biking, making it impossible to relax or sleep. People were literally looking at me as if i was a monkey in a cage in the Zoo. It took a while to get used to, but eventually I wasn’t bothered by it.

4 hours in….And just my luck….it started raining…HARD….and then, as if rain wasn’t enough, it started hailing…HARD! It was the craziest experience, because the top was open and they tried to cover the top with canvas for the rain, but it was leaking and raining in from the open sides, wetting me, the matras, my quilt and blanket, even my socks. I had some company of a friends’ dog Chu Chu, and the poor baby was soo wet and shivering. While freezing my ass off, I had to try and warm up Chu Chu. They asked us if we wanted to get out of the cages with the rain and hail being so heavy, but we refused, because we didn’t want to give up so easily. That wouldn’t be fair to all those children. 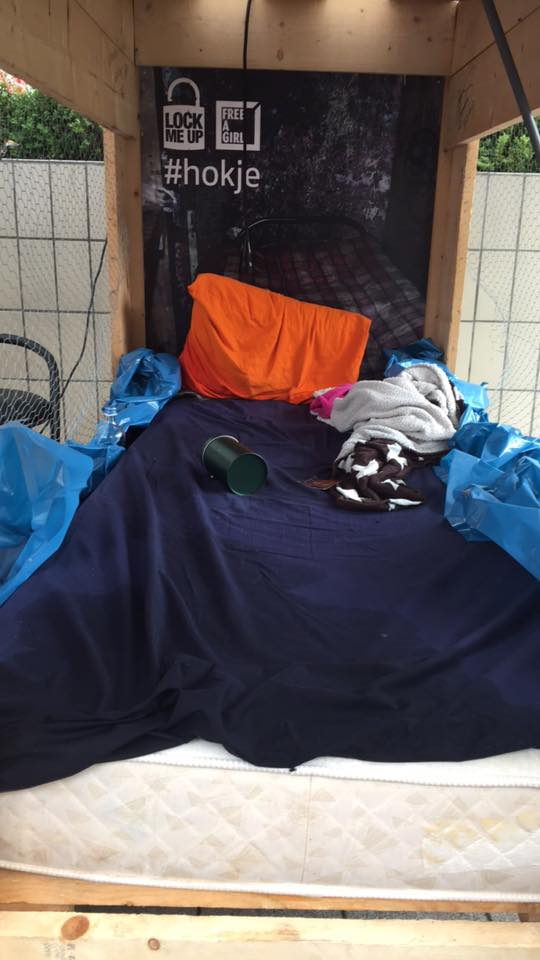 Despite choosing to stay in to make a statement, I do remember thinking how in the world I was going to keep this up for the next 7,5 hours. Eventually the rain stopped, but with everything being wet, I was freezing. Luckily, I got some visitors who kept me distracted for a few hours and 3 hours later we were allowed outside to eat a little bit. We then asked if we could use the dryer of the restaurant. Honestly, we got so lucky. I never ever thought in my life I would be so grateful for a something as simple as dry cover sheet and blanket!!!
By the way, I keep saying ”we”, because I was accompanied by another lovely lady who joined me on this adventure in another cage next to me.

I collected my experiences in a few Facebook LIVE vlogs, until my phone didn’t want to go live anymore. They are in Dutch, but feel free to check it out:

After being dry, the sun started shining again, but I started feeling so tired. I literally was counting down the hours. The last few hours I had a lot of sweet people around me who kept me busy, so the time went by and despite being really hungry, I managed to shift my attention. And so..I survived the 12 hours!

What I’ve learned from this experience:

1. There is always, always, always something to be thankful for. I already knew this, but for the first time found myself in a situation where I actually experienced this (how privileged is that!!!). Even the smallest things like a warm blanket felt like a heaven, which I know millions don’t have.

2. I made the right decision to stop Fashion blogging and will be putting my energy into more worthwhile and valuable matters.

3. I would NEVER wish a life like this for anyone. We had it relatively easy, but imagining this (and worse) being an everyday reality for millions of innocent children is just crazy. It’s unacceptable!!!!

4. I might not be able to change the world, but I am able to contribute to a better one. And if everyone would realise this, together we could change this world.

5. I had people walking by giving me €0,05 (cents), but in the end it all added up. So literally every cent counts and makes a difference!!! ”I don’t have much” is NO excuse.

6. Help and generosity often comes from the most unexpected places.

7. I’m not going to spend much time on this, because I like to focus on the positive, but I want to have said it: While I had random followers on my Instagram from all over the world, whom I don’t even know donating, I also had friends (whom I know) sitting on their Louis Vuitton bags, simply ignoring my request to donate, even the smallest amount.

8. I still have faith in humanity, because despite me not raising the amount I had hoped for and disappointment in many people, the generosity and love coming from so many others is overwhelmingly beautiful. Not only those who donated, but also those who shared the awareness, just everyone who contributed in their own way. Thanks to all of you (you know who you are), those 12 hours weren’t for nothing!

It was quite to experience, and I regret nothing….I’m actually extremely grateful for this, as it was very enriching. I know there is soo much wrong in this crooked world, so much pain, so much injustice and imbalance. There is a reason why there are so many organisations, fighting for a better world. I also know there are so many organisations profiting and capitalising on this pain, so I understand many of you being mindful with the charities you support.
For me it’s very simple. We, despite our own problems and issues, are privileged. So when given the chance we should help. Even if it’s €1,- or some of the excess stuff we have and never use.

I don’t have the final total raised yet, because donations can still be made up until tomorrow Monday 22nd of May 2017 here: https://www.freeagirl.nl/lockmeup/deelnemers/nadira-ramautarsing/

Blessings and much love!! 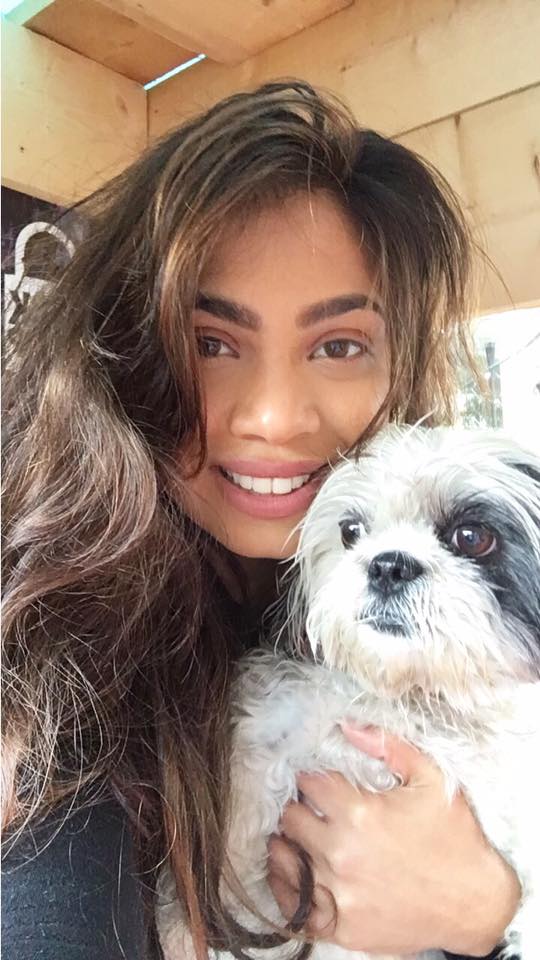